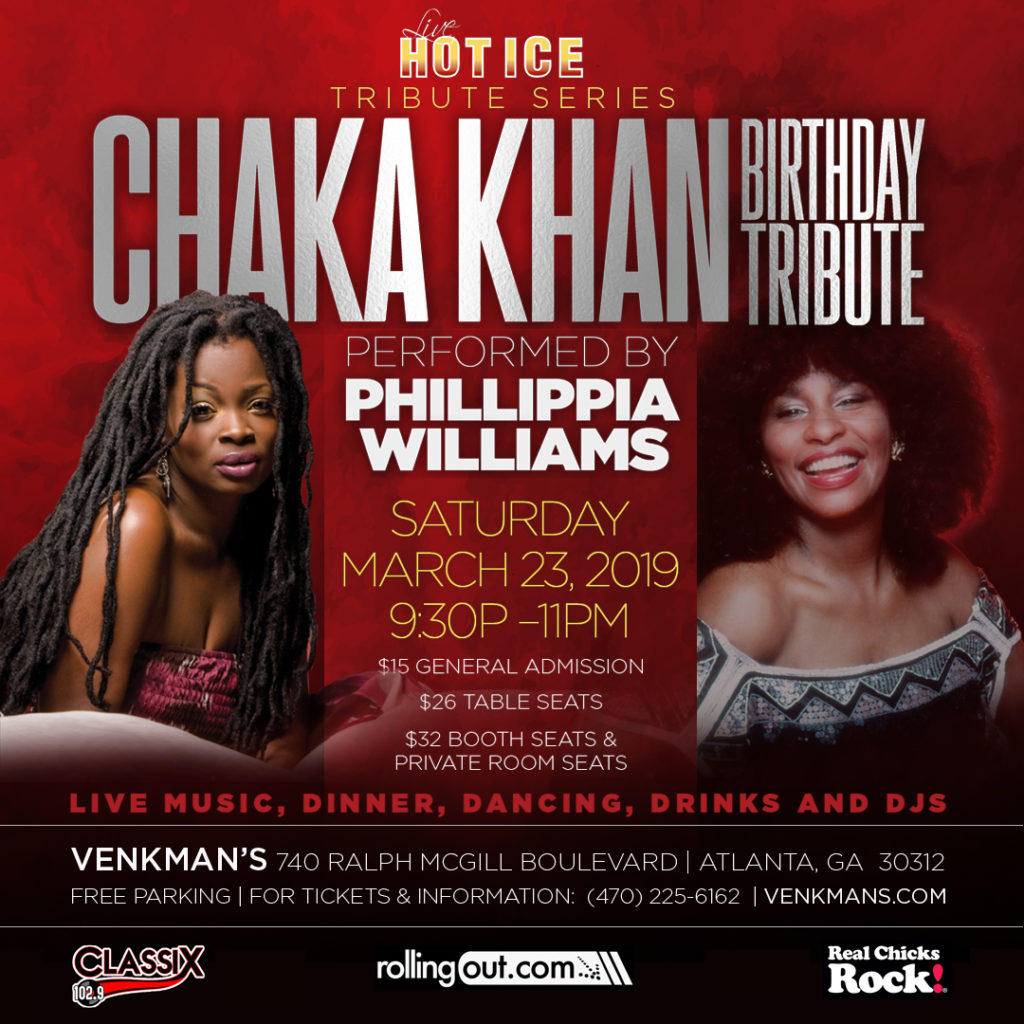 Classix 102.9 FM and Hot Ice Live celebrate the music of Chaka Khan on her birthday Saturday, March 23 at Venkman’s. Come out for music, dinner, dancing, drinks, and DJs as ATL Soulstress Phillipia performs hits from the Queen of Funk Chaka Khan. Chaka Khan’s voice earned her nearly 20 Grammys, a hosting spot on Soul Train & The Billboard Music Awards, and two nominations for the Rock & Roll Hall of Fame. With a career that spans from the 70s to the present, Chaka Khan has also racked up a roster of collaborations including Quincy Jones, Prince, Ray Charles, Mary J. Blige, and of course her original band “Rufus.”

Phillippia is the epitome of a musical phenomenon. Her sound is representative of all the influences in her life – a fusion of R&B, Soul, Gospel, Reggae, Jazz, and Hip Hop. Her powerful voice and command of the stage have earned her performances alongside industry greats such as Jill Scott, K-Ci and Jo Jo, Joi and a host of others. She has also been featured on tracks with violinist Ken Ford, Bow Wow, The Iconz and The Peabody Award Winning poet, Georgia Me. When backed by her live band, Urban Soul, Phillippia’s voice becomes yet another instrument bringing forth raw, hypnotic energy that lifts captivates crowds.

In 2005, Phillippia earned a role in the Tyler Perry’s box office movie – Madea’s FamilyReunion– where she performed an original song written by Tyler Perry himself and produced by Ronnie Garrett. The song‘Look in the Mirror’ also appears on her 2006 album release, ‘Earth Child Rebirth’, which features additional production by Ken Ford.

PLEASE NOTE: If earlier dinner reservations are made, your seats are not guaranteed for the show. For example, you cannot reserve a table at 8:00 pm and keep it for a 10:00 pm show. The only way to guarantee a seat for the show is to purchase table, booth or banquette tickets.

Reservations for the Captain’s Room (private dining room) can be reserved for parties of 10-24 guests. For more info contact Mike at Mikeh@venkmans.com